Sorry I haven't posted here in a while, first weeks back at uni is somewhat hectic! Also impending dissertation hand in is leaving me no time to make art. There's a sad sort of irony to this, the idea that being in art school is limiting me from actually seeing art and making art. (I say this all whiney like but I am also terrified of graduating. Meh.)

But yeah here is a picture I made for the F Word it was to accompany a piece on the idea of 'rebel mothers'. This idea offers a feminist viewpoint on the idea of mothering, challenging conservative binary obsessed stereotypes. I think it's a really interesting idea and I enjoyed making this picture.

Everyone always seems to idolise the style of children's art. However, what interests me more is that sort of in between stage at the age of around ten and eleven when you are conditioned to emulate adult styles and techniques but you can't quite master it technically. So you end up with this flat oddly proportioned work that is neither your work or the 'acceptable' adult styles you're trying to copy.  I've tried to incorporate this sort of flat lip synch style in the forms of the mother and child in this work. Posted by Bethany Rose at 12:09 No comments:

A is for Anxiety 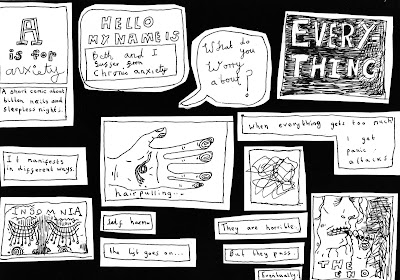 Here is a little comic I made about my anxiety. Ironically I feel very anxious about posting it! However, I am trying to be brave and keep on going with this blog, even if it is a little bit clunky right now. Aesthetics-wise my use of black and white was inspired by my two favourite comic artists: Art Spiegelman and Charles Burns. The claustrophobic impact their monochrome landscapes have are so striking, thus I was hoping to utilise a similar effect.

The use of black card was inspired by some illustrations I did for the Hackney Citizen with a friend from my course. Here is an illustration we did to complement an article we wrote on a boutique in Dalston. The werewolf in the dress is my favourite bit I think! 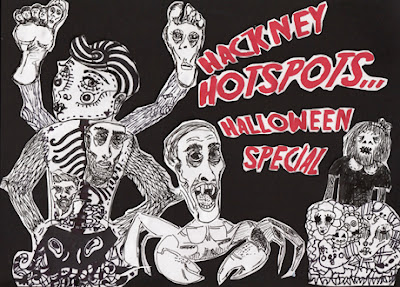 Posted by Bethany Rose at 10:25 No comments: 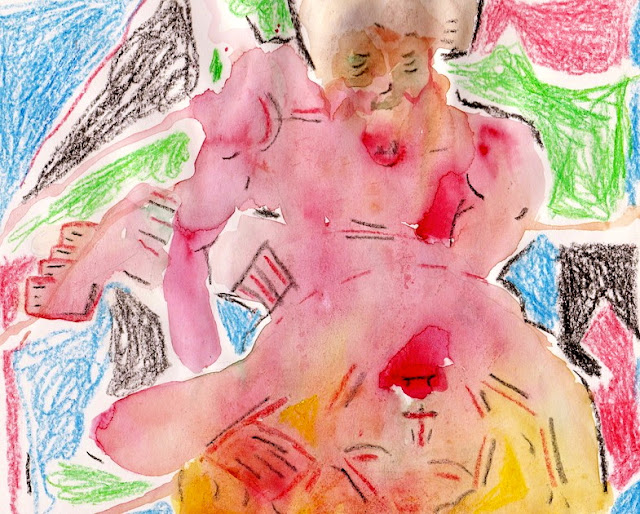 Here is an art work I made for the online feminist magazine, The F Word. I started making art and illustration to complement their articles in the autumn and am finding it to be a really interesting experience.
This particular work was created to complement a think piece critiquing pornography. The work is based on a piece from Jeff Koons 'Made in Heaven' series. I was influenced by Gerhard Richter's 'Capitalist Realism' pieces where he appropriated existing photos and painted over them and blurred them. In this sense through adopting an existing image I like to think I've created my own 'Capitalist Realism' piece. I chose to keep the work fairly abstract as I felt that to create a literal figurative work would be missing the point. After all if I created a gratuitous image on the subject of pornography (Paul McCarthy's current work at Hauser and Wirth is a pretty good example of this) I would be conforming to the very medium I'm meant to be critiquing.

Posted by Bethany Rose at 15:48 No comments: 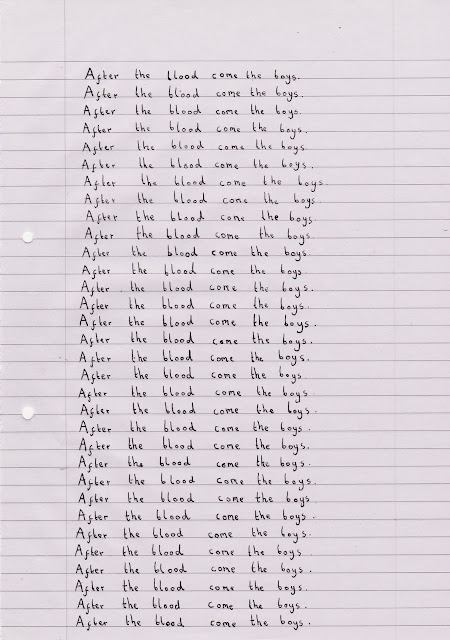 This art piece intends to critique the pre-supposed narratives surrounding gender roles and heteronormativity. The choice of repetition through the school room punishment of lines renders the seemingly ‘natural’ subject of gender uncanny. This echoes David Shrigley’s own darkly humorous use of lines in his art work ‘Untitled’ (1996).
The work intends to critique the propagandist potential of consumerist culture, which enforces an artificial heteronormative model of femininity within the minds of young girls. Thus the doctrine of femininity, and the gender binary, doctrines taken to be so natural that they are performed unconsciously, are put forward to the viewer as ideological propaganda.
The quote “after the blood come the boys” is taken from the film ‘Carrie’ which itself inhabits a sick space of adolescence, exploring the powers of the uncanny that are seen to manifest within the young girl Carrie. The choice to appropriate dialogue from a popular horror film rather than the words of a queer theorist or a literary classic is important. This illustrates the importance that pop culture holds in the construction of gender identity, putting forward the importance of a genre that conventionally inhabits little critical space in academic cultural discourse. The words are attributed to Carrie’s mother who is seen to greatly fear the power of female sexuality, both within herself and within her teenage daughter, and are directed to her daughter in order to frighten her into acquiescence. Thus, through this mantra being passed down from mother to daughter, the quote mirrors the enduring power that the ideology of gender holds from generation to generation.

Posted by Bethany Rose at 15:37 No comments: 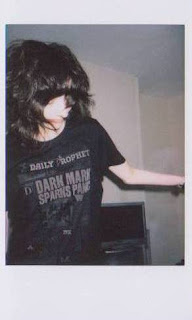 My name is Beth, I am twenty years old and I am in my third year at Central Saint Martins studying Criticism, Communication and Curation: Art and Design. I am aware that the blogosphere is supposed to make thing easier for people starting out in the arts world, however for me it's made everything so much more intimidating. As a result I have put off making a blog with any of my work on for quite some time now. However in the spirit of the new year I have decided to give it a go. As a result I intend to use this blog as a space to store my art, photography and writing, using it as an incentive to develop my work.I particularly want to use this blog as a motive to explore fashion and photography more. For in our lives so much of our identity is defined by images, the images we capture both of ourselves and the world around us. This is a concept I've really struggled with and has actually made me even more withdrawn. For to be seen as 'unphotogenic' is to be part of the 'undead' of our society, we do not exist in reality for our reality is defined by images. However, rather than becoming lost in this intimidating spectacle through this blog I hope to able to utilise image making in order to critically negotiate both my identity and my work.
Posted by Bethany Rose at 11:47 1 comment: