So, I matriculated last week. 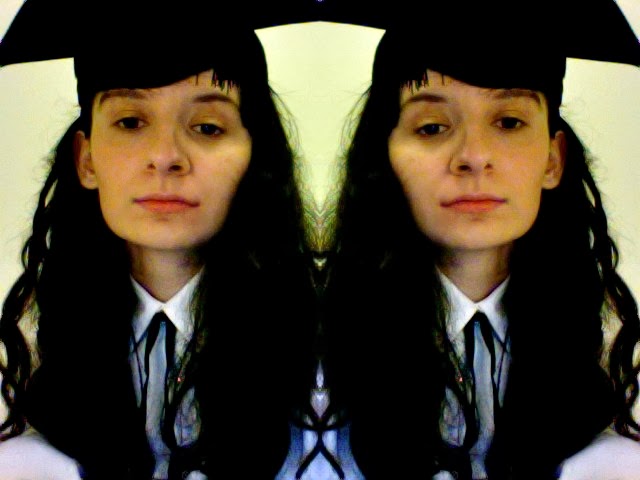 (And looked like a second rate Lydia Deetz whilst doing so.)

And as I sat in the Sheldonian theatre and freaked out that the only latin I knew was carpe diem. (And the only reason I knew that was cos the boys in the bristol club scene with polo shirts and number 1 shaves had it tattooed on their chests) I kinda had a holy shit 'is this real life?' moment. I was the special needs kid born from single mother and foreign father, welfare princess who got predicted shitty grades from their shut down school cos they based it on your family income. And now I'm somewhere pretty and old and I'm expected to be smart and kno Latin. Like how did I get here?!

In this old skool (like literally old skool!) model of education, where teenage boys where cravats unironically, class divides are sharper. I feel more like a little ethnic chav girl than ever, yet I refuse to play the working class card.

Not because I think I'm fancy now or anything. Or that I've forgotten where I 'came' from. If anything I carry these stories closer than ever. And just cos I've read a bit of Kant doesn't change the fact I cleaned toilets for money as a teenager.

No it's not that.

I just find the spectacle of the privileged academic clinging to an unrealistic portrait of working class identity repulsive.

This issue is primarily a white, British thing, and hey, I'm half white (or white assimilated at least) so I think I have an alright idea of how this stuff plays out.

In academia, literature, art and journalism the ghost of a working class background is used as a defensive shield against any legitimate criticism against that person's work or personal belief.

In mockney posturing some of the most privileged figures in the creative industry, cishet white people with steady incomes, nice homes and broadsheet columns, can claim fantasy working class oppression (my great uncle worked in a mine!! Yeah but YOU don't) as a way to deny the very real oppression of people of color and trans people. This is a bizarre fantasy world where writing a thesis on Marx is the exact same thing as blue collar labour.

I think of Julie Burchill's knee jerk reaction against the critcisms of transmisogyny levelled at Suzanne Moore. 'But i am werking class yess?!'

1. Um I'm pretty sure you're working class ship sailed a while back.

And 2. Plot spoiler: Having working class 'heritage' isn't some kinda halo, granting you immunity from the repercussions of your actions.

Or that New Statesman piece defending Caitlin Moran (a privileged white woman who came from a working class background) who was facing a great amount of criticism at the time for her declaration that she "literally could not give a shit" about the representation of people of color in Girls.

And their argument? That "working class women are rarer than hen’s teeth in almost all sections of the media." Sure I get that, I agree with that,  but that doesn't excuse racism. Nothing excuses racism.

Earning a good living working as a journalist in London is not an accurate reflection of the lives of working class women, in 21st century Britain. To claim that it is is an insult to every single mother working three jobs to put food on the table.

For we are privileged people who came from nothing. That is not an oxymoron. I am proud of my heritage, my family, my ancestry. The stories of my Great Grandad working as rat catcher on the South London docks, where kids stole coconuts from the ships and he swears he saw a rat as big as a dog once. And the biscuit factory, Peake Freans, at the end of Banyard Road (I think it was Banyard Road?) where all my family worked. My Great Aunt still won't eat custard creams says it feels too much like hard work! Or the silly anecdotes my Mum told me about when I was little and the Vet wanted her to spend half her week's benefits on medicine for my hamster.

We should celebrate our histories. But instead of using it as a narcissistic veil to hide out new found advantages in the world we should be using it to help people, to widen accessibility into the creative industries. Just because by some fluke we 'made' it doesn't mean that people ten times as talented as us will.

I was lucky enough to grow up before all these budget cuts, before the rise in tuition fees, when EMA didn't live in history books. The world has not been so kind to the comprehensive kids filling out their UCAS forms right now. Success as a young  working class person has never been easy, but now it's damn near impossible. We must abandon our defensive faux-working class rhetoric, and acknowledge our heritage and our privilege so we can actively work together to help the next generation of creatives achieve the success they so rightly deserve.