More proof that all cartoon network shows are just cute versions of the akira transformation?!

also i want to paint this... 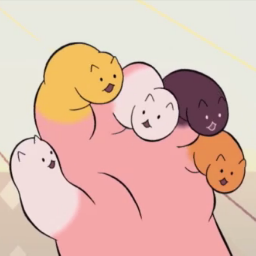 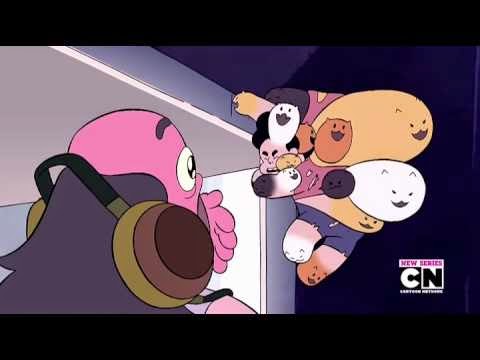 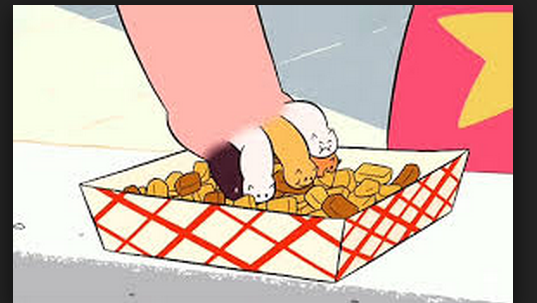 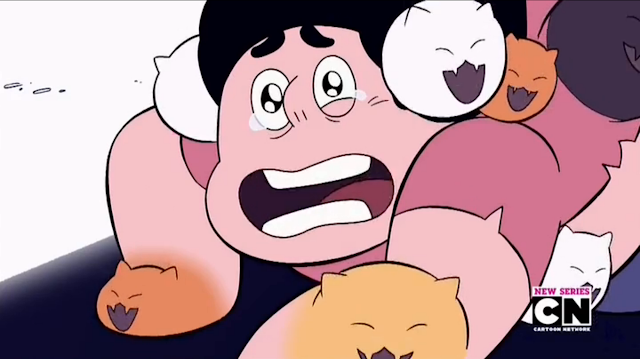 Posted by Bethany Rose at 18:45 No comments: 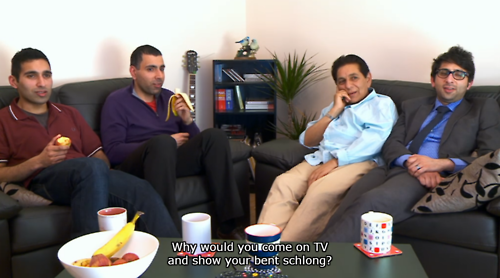 
"Trying to turn back time

as trying to get

to lower its prices."

The national headline is a sad face emoticon, proof that the state of the nation and my self deprecating online persona are merging rapidly. 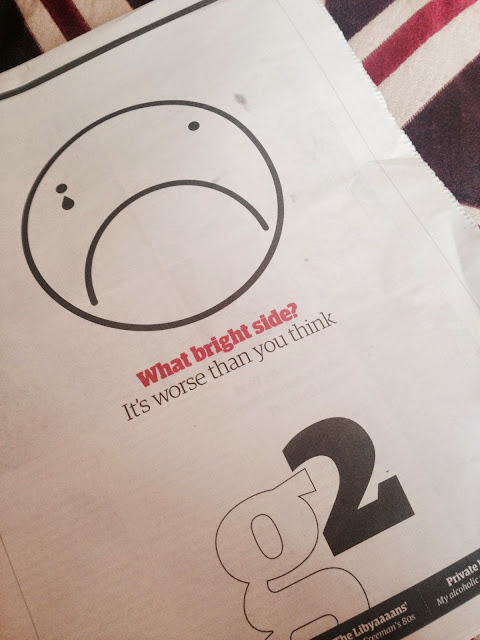 British politics is not a rational game, it is not a sensible game and it is not a kind game. It is gleefully violent, outrageously cruel, past the line obscene, Saw Movie blood thirsty and end of the pier ridiculous.

British politics has no etiquette.


Why is the goose-step

not used in England?

It is not used

the people in the street

It is Clive Martin, the greatest writer in the country, tweeting nonce in block capitals to Conservative politicians, it is Charlie Brooker saying I hope she fucking walked to Natalie Bennett from his set design sofa, it is every episode of Goggle Box, the best social history, social document, this side of the British Library.

It is the Guardian colouring book of David Cameron bottle feeding a lamb, it is when I was sleepy and accidentally said David Cameron breast feeding a lamb, it is Steve Bell's condom headed Cameron, creative uses of the word cunt and the phrase tory cunts and tory scum, it is the game show broadcasts of politicians whaling over each other. And of course it is every facebook status type out if you voted UKIP or Conservative pls unfriend me (smiley face emoticon.)

And most of all it is Paddy Ashton half chewed fedora: 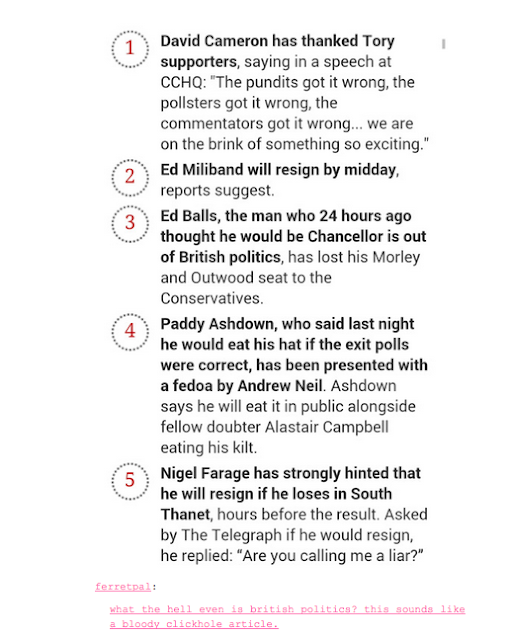 British politics is not subtle or balanced because it does not need to be. It has never needed to be.

for instance, is an all

In a dozen obvious ways

But is not England

the rich and the poor?

that there is anything

Party in the cul-de-sac or riot in the street.

It has fallen so far into parody that Russell Brand is set to symbolise the left and Nigel Farage the right.

Sidenote: Russell Brand is trademarking his spelling of the word revolution. 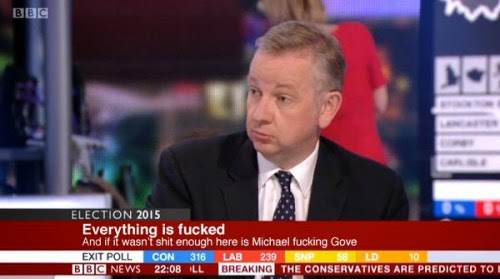 I am critical of an authentic working class and cringe at the word Tory, a  ghost phrase from an Old Labour that no longer exists. But this isn't the time to quibble semantics.

I always feel the most working class during an election I suppose, class is an embodiment, a heritage, a history. And there is almost a need for a bolded disclaimer label printed over any content I write, any social media stuff I reblog, middle classes this is not for you, not right now, not like this. And how corny is that?

But in all societies

Charlie Brooker joked that the TV party debates was a great opportunity for each politician explaining their unique point, their beliefs their polices.

And the same applies to history.

Have you ever had a tab open, watching a movie on putlocker, spam ad talking, second browser u forgot about started playing three days later. They crash eventually, they always do (unless you have to hold the power button and shut it down yourself).

What can the England

what have you in common

with the child of five whose

photograph your mother keeps on

And in the DC Batman/Patrick Bateman occupation of London, the martyr's death of the Joiner's Arms and the 2012 Olympics, sometimes it takes a playground pinch to the neck to restore the capital to its nonsensical self.

The Stock Exchange will be pulled down,

will give way to the tractor,

will be turned into

the Eton and Harrow match

will still be England,

stretching into the future

to change out of recognition

and yet remain the same.

*(note: all text by George Orwell from here on in marked in yellow)

And even Welsh and Scottish readers are likely to have been offended because I have used the word ‘England’ oftener than ‘Britain’, as though the whole population dwelt in London and the Home Counties and neither north nor west possessed a culture of its own.

There is no question about the inequality of wealth in England. It is grosser than in any European country, and you have only to look down the nearest street to see it. Economically, England is certainly two nations, if not three or four.

Posted by Bethany Rose at 12:40 No comments:

Remembering the power of print on a sad day 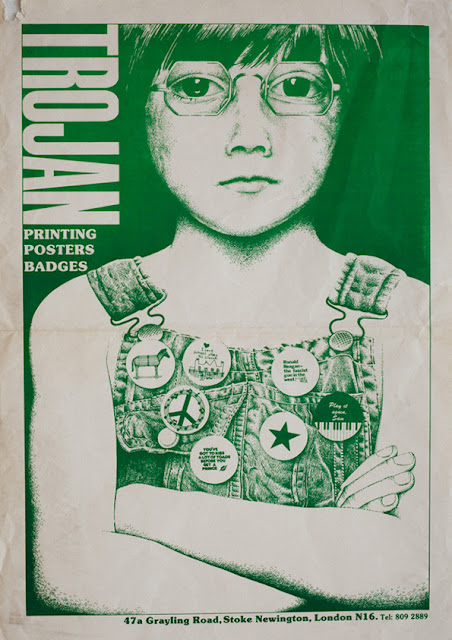 Posted by Bethany Rose at 15:20 No comments:

OK so this blog post is ridiculously delayed? But Hidden Visions! The a+ art show on mental health by young artists dealing with this stuff curated by irl princess Lizzy!! It happened and it was great and thank you to everyone who came and stuff?? Tho meeting new people can be scary which reminds me of how art galleries aren't always an ideal environment for my own mental health (interacting! with! other! humans! Egad!) but I had a really awesome time and Harriet came and we had a really loud conversation about postcolonial interpretation of the matrix movies which probably scared everyone off but hey! Also me and Maeve got a talk about or cats...like A LOT. So all basic needs met tbh! I'm seriously so happy to be a part of this wonderful thing and I can't wait til Lizzy is the director of Tate and also Vogue and also THE WORLD. 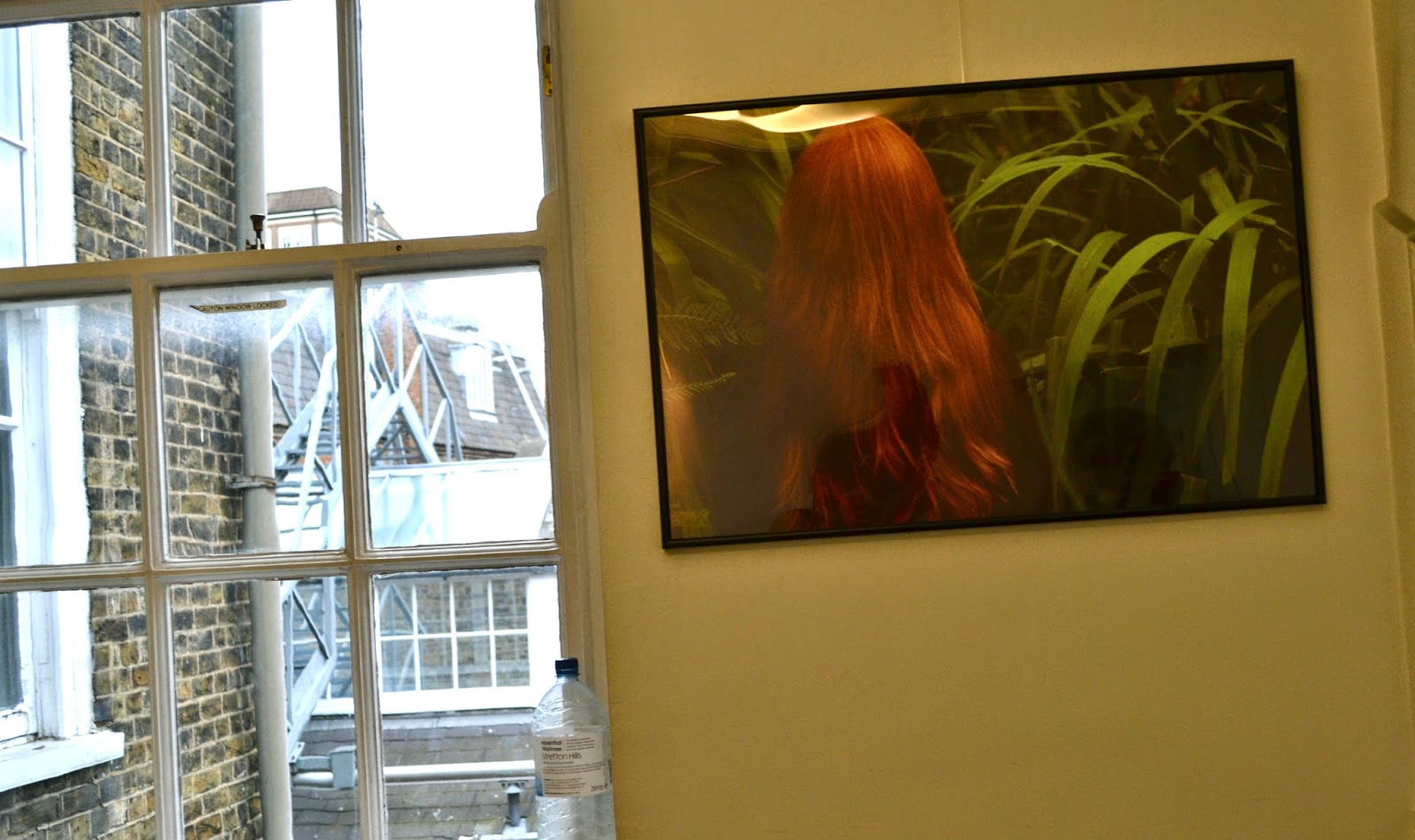 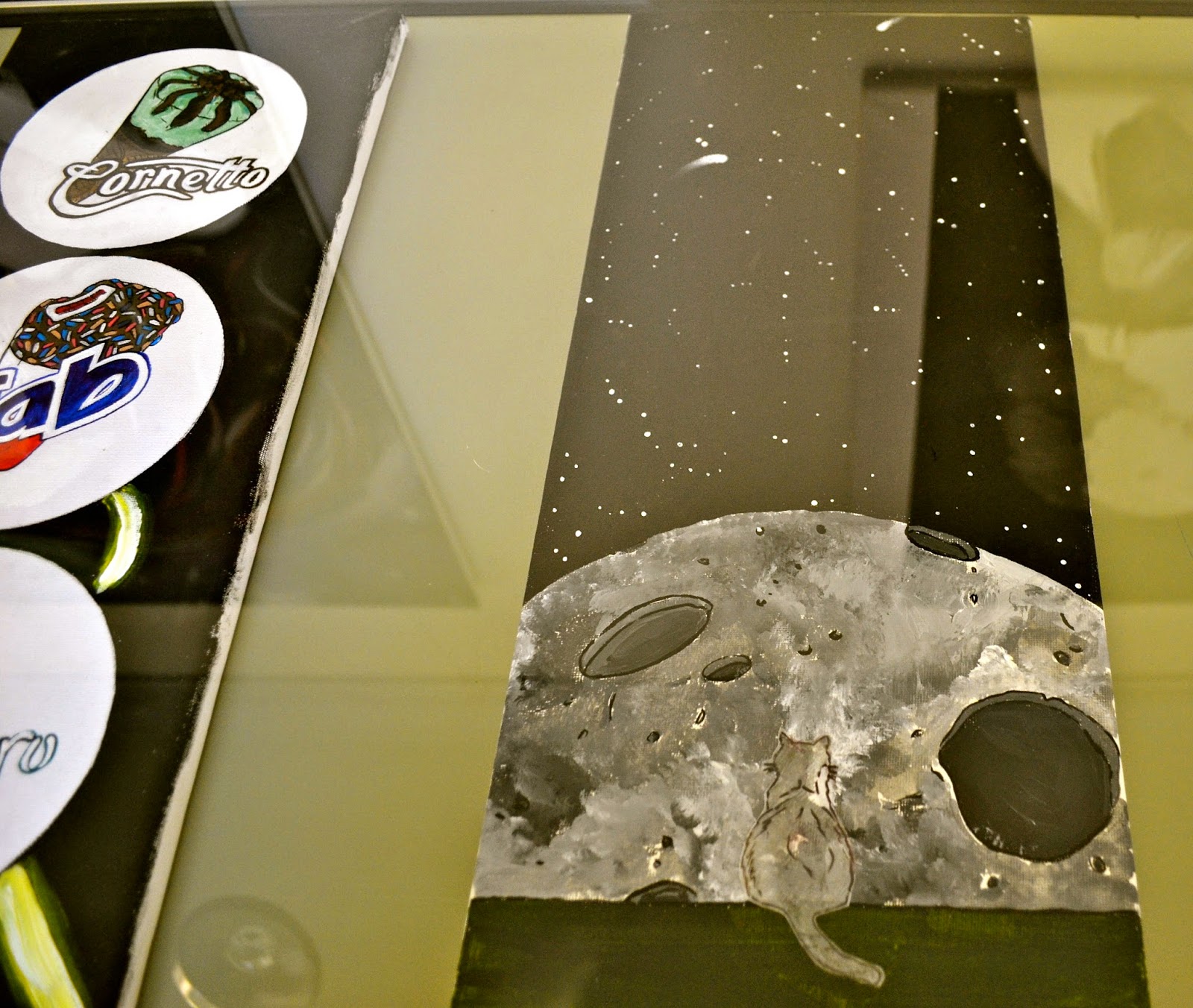 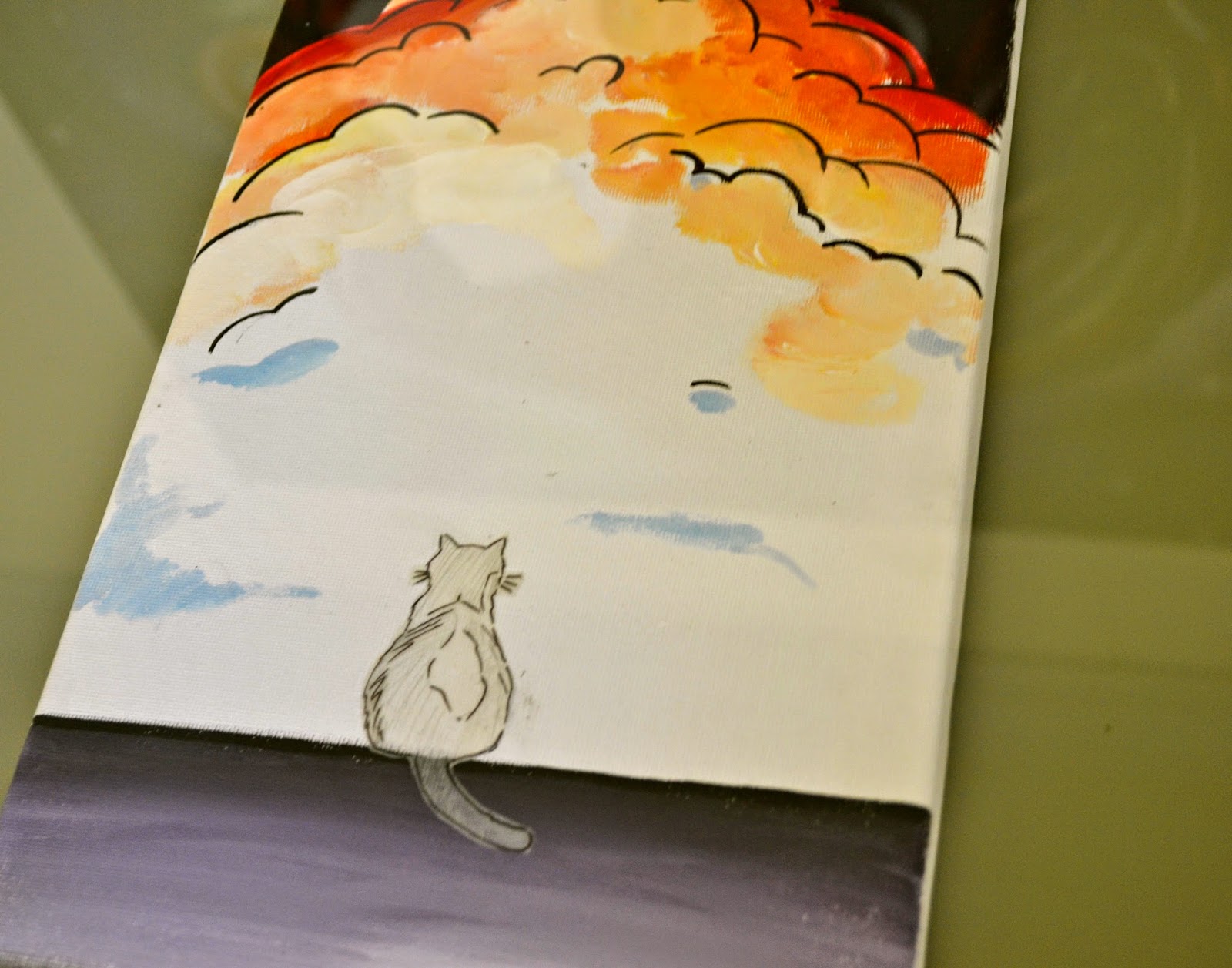 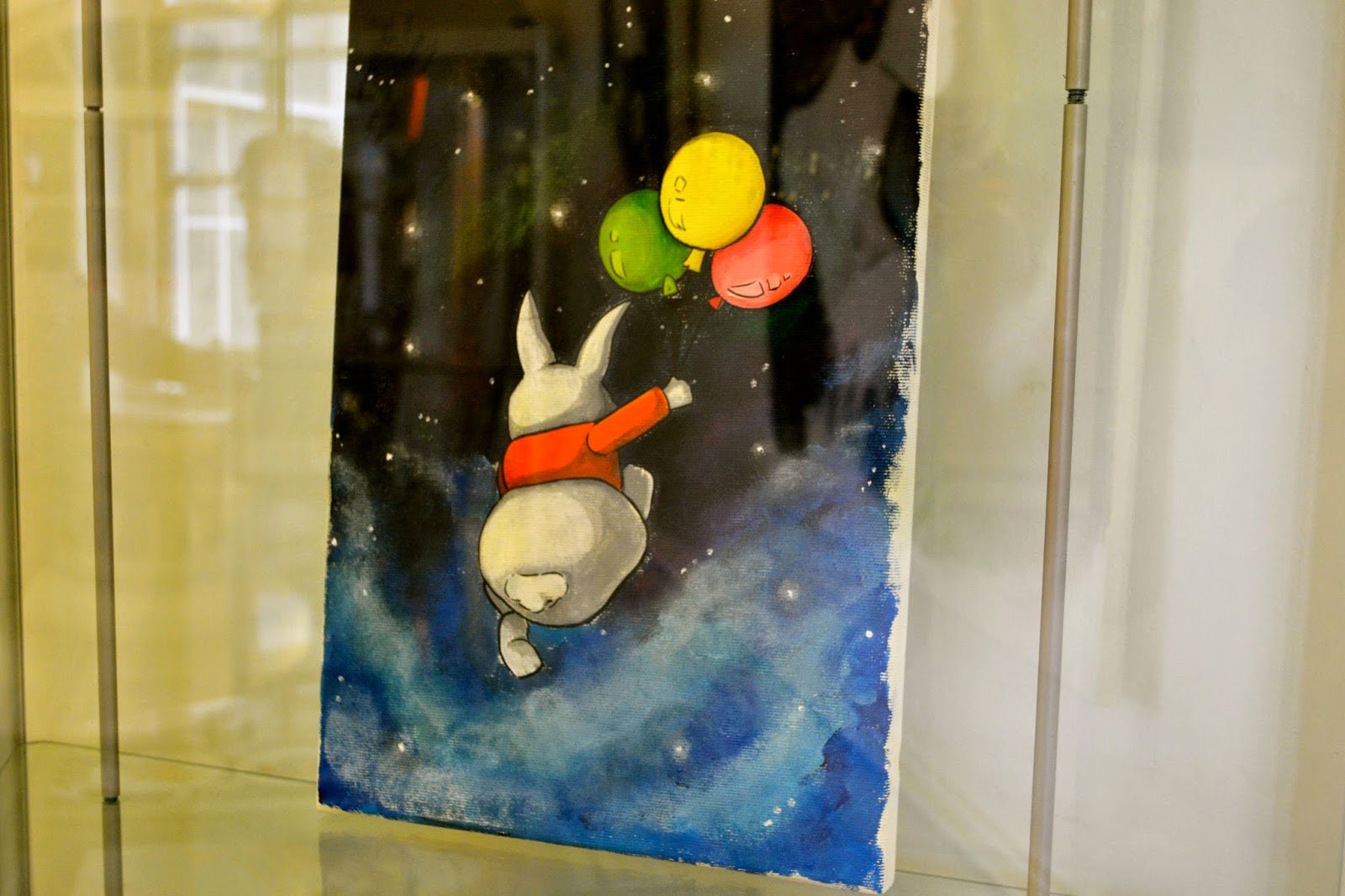 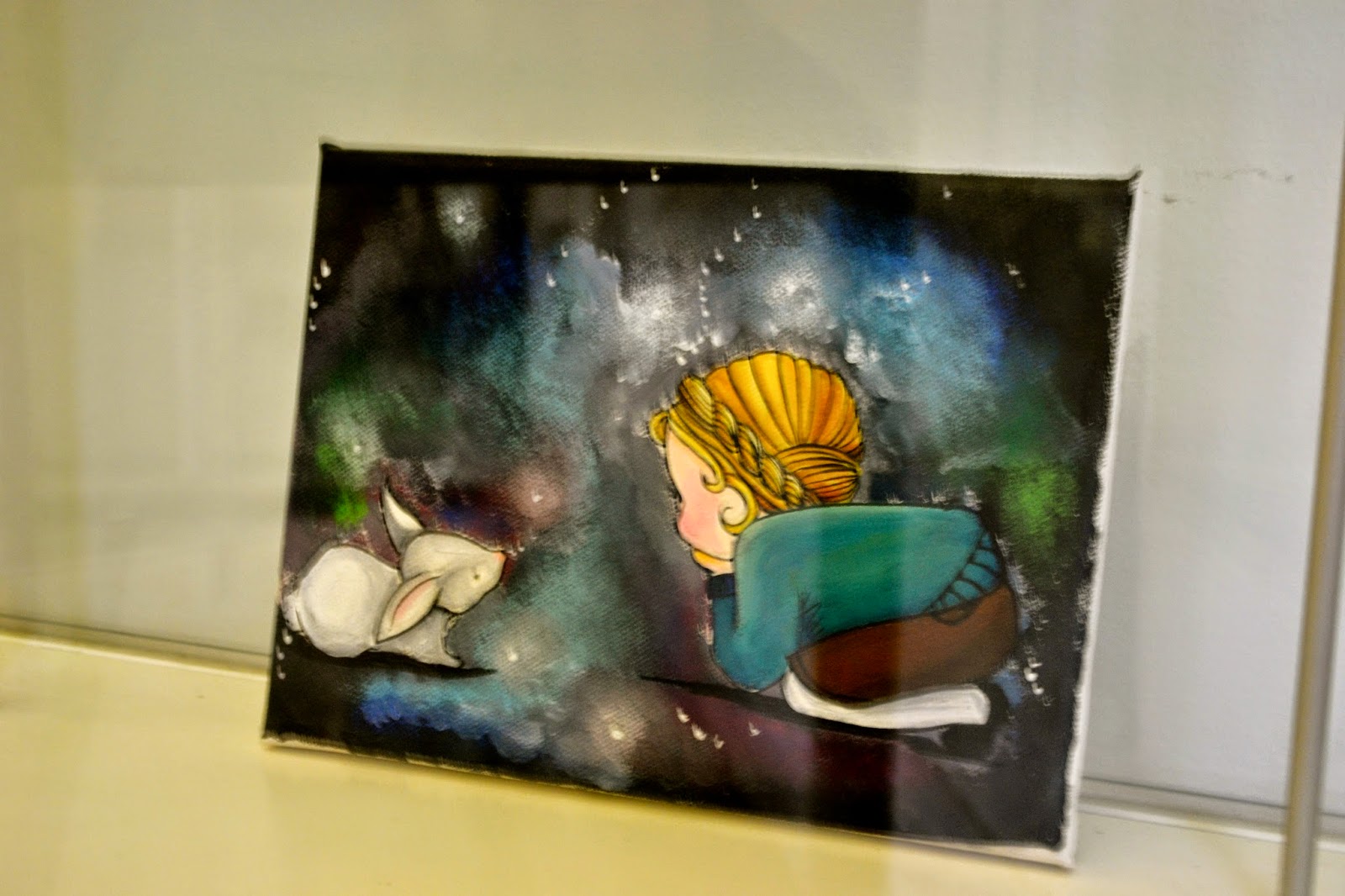 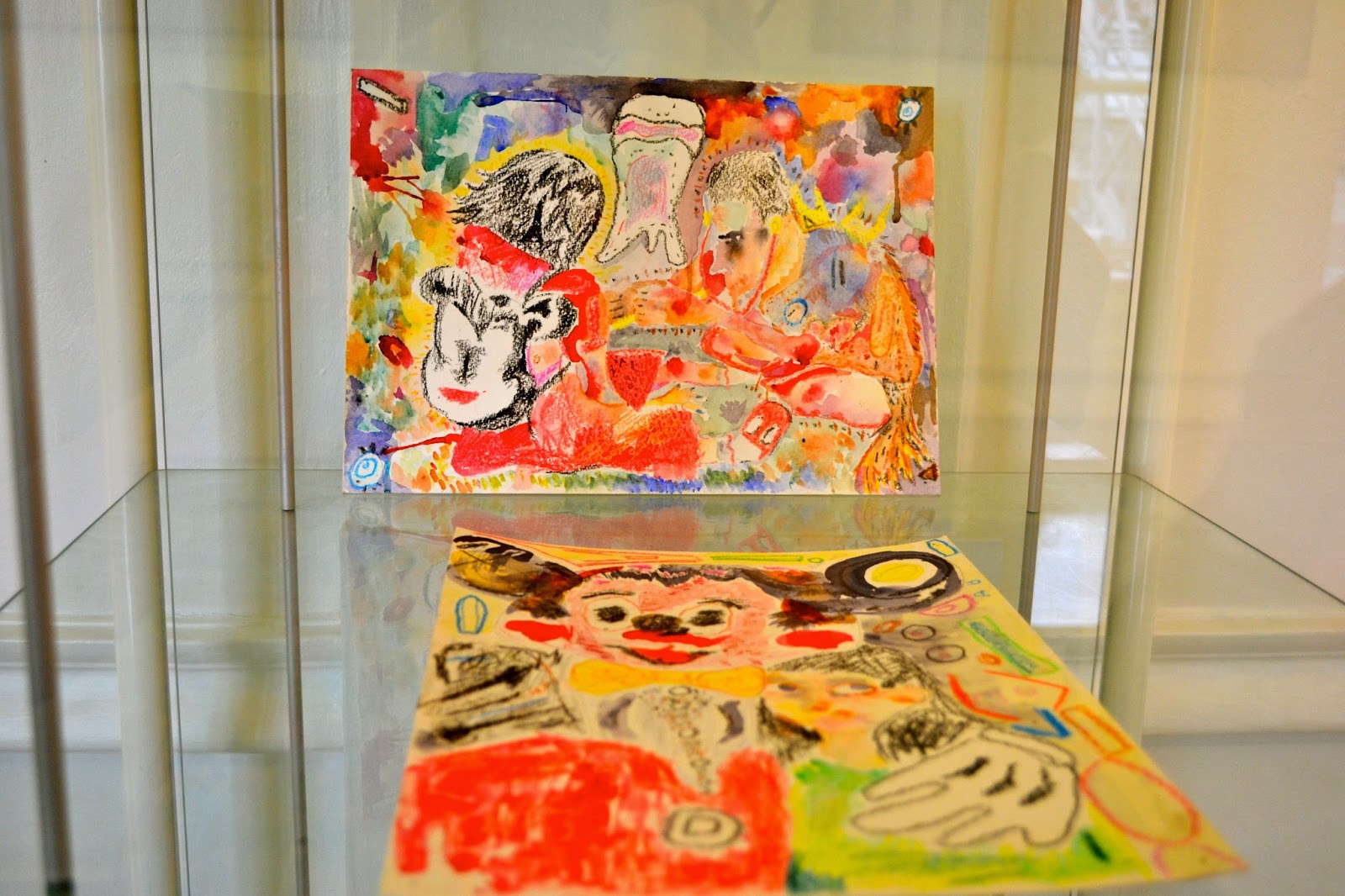 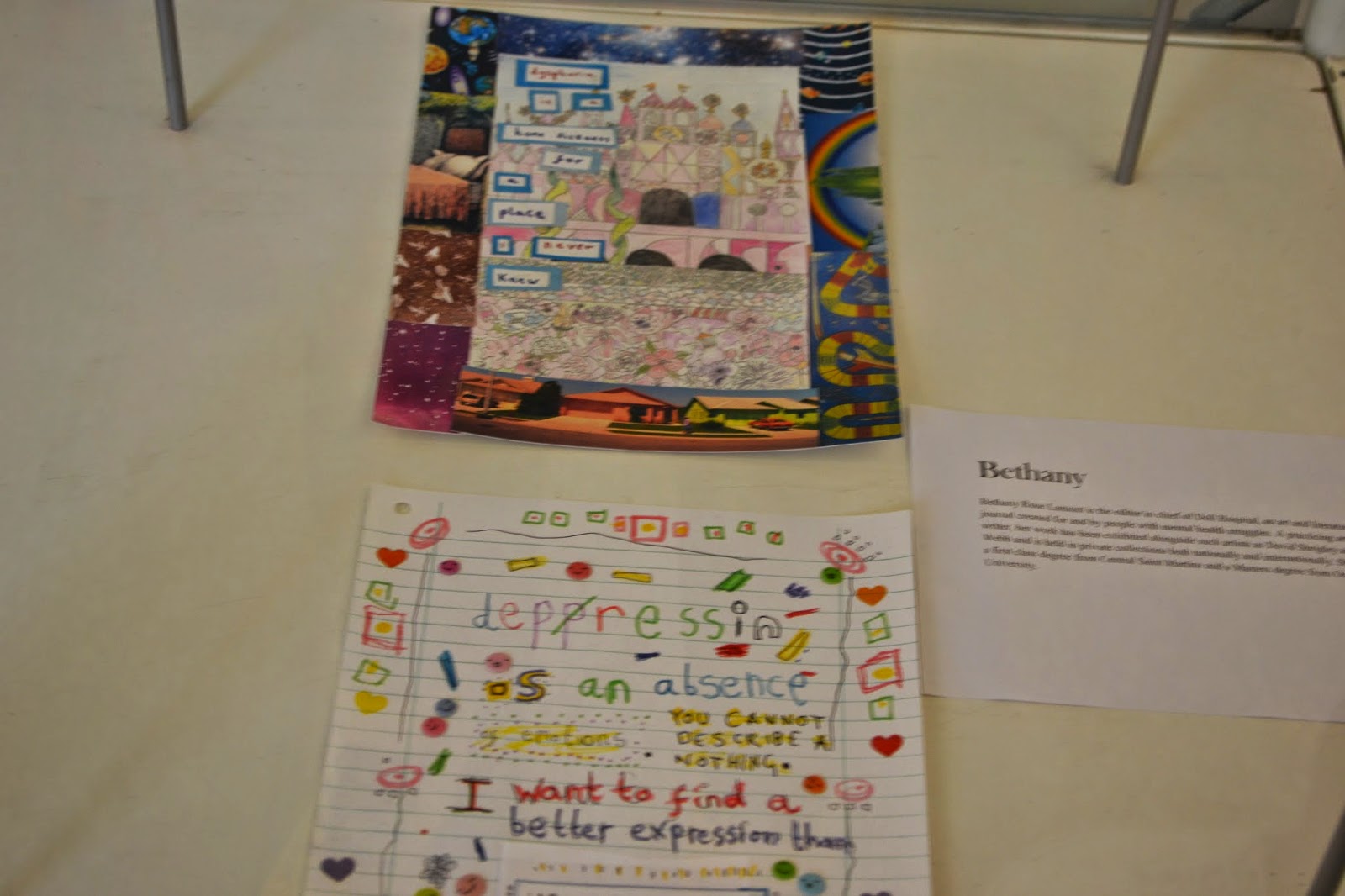 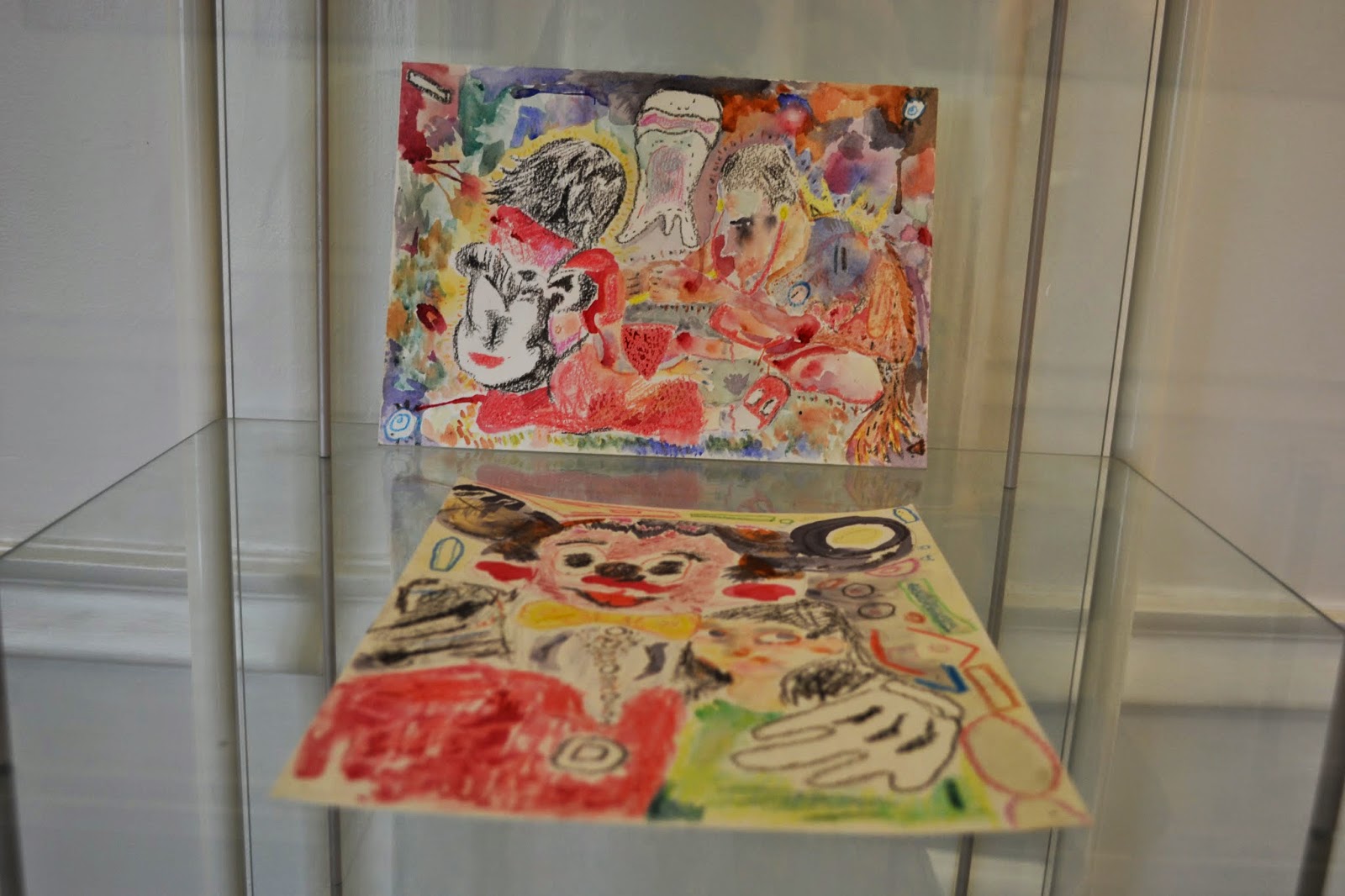 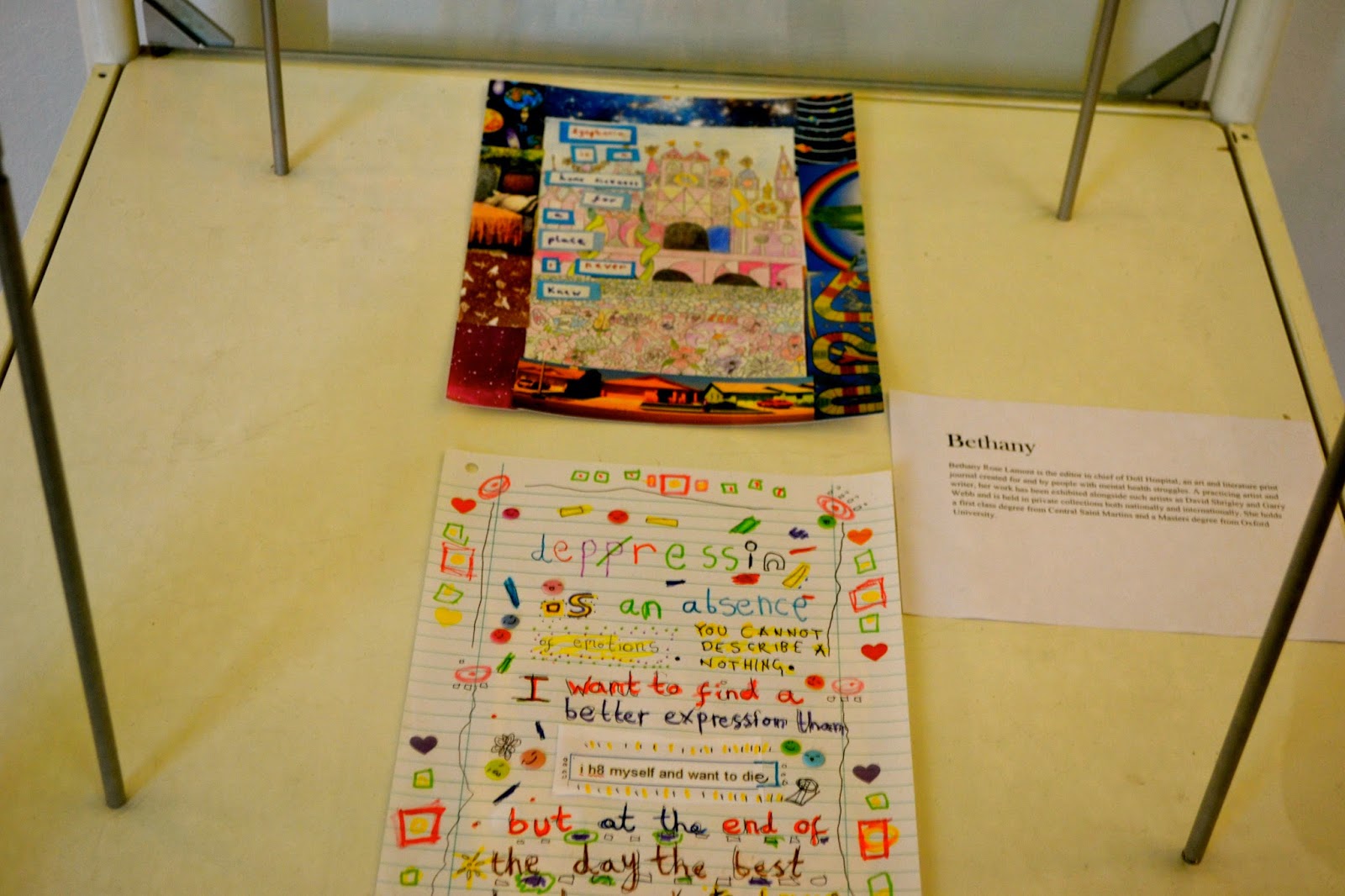 Nothing About Us Without Us: Thoughts on Mental Health and Medical Museums We live in a place where autism is an allistic's special interest, where disability is a dress up box and mental illness the halloween costume of choice. This ideological occupation is as interesting to me, as relevant to me, as the colonization of my home country. And when Saidiya Hartman speaks of the violence of the archive, and when mental institutions serve as museums, serve as most haunted sites, serve as shock and gore, to slip in an out of like a Tesco costume straightjacket, it is necessary to reclaim these sites also. I edit an art and literature journal on mental health, I work at a mental health museum, Glenside Hospital, dedicated to empowerment through reclamation, I'm writing a novel on mental health stuff. (Sooo either I'm an amazing advocate or I just really like talking about myself?! Most likely the latter). Even seemingly 'progressive' mental health narratives are limited, relying on straight up bad chronic illness analogies with unsettling ableist implications, Western white washed histories and a failure to understand intersecting experience such as class, race and gender that informs the individual experience. In this sense we must look, not just to our libraries, but to our museums to understand, when it comes to subjects of race, mental health, disability and neurodiversity, whose telling what story and why.

This doesn't necessarily mean writing the next Ulysses, even though that's y'kno cool too. We can work with what we've got here. Because even though we might not get taught it at school the history of disability, learning difficulties and mental health is rich and deep and awesome. It can just be finding our more about activists like Ed Roberts, the ADAPT protests (images of these movements are like my reblogged images on tumblr? more than ABBA outfits! people wanna know about this stuff!!) reading work actually written by people with mental health struggles, particularly those whose voices are less likely to be heard, less likely to get a fancy book deal.

The Glenside Museum Pinterest and Tumblr that I set up and manage.

It's not that these stories don't exist (they do, they exist in multitudes) it's just that they are lacking the right platform. And I want to see them spoken loud in the very spaces that sought to silence them.
Posted by Bethany Rose at 13:44 No comments: