Beyond the Bell Jar: A Mental Health talk and writing workshop for The Bombay Review World Tour

Okay so this is a blog post for a super cool Thing of the highest order! 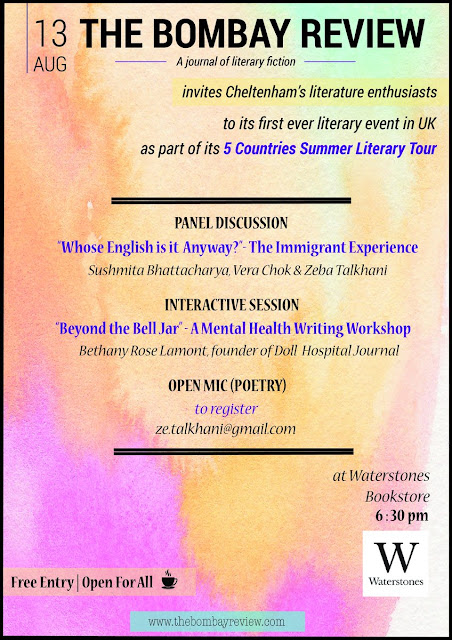 Ridiculously honoured to say I was invited to speak (!!!!) alongside these perf humans: 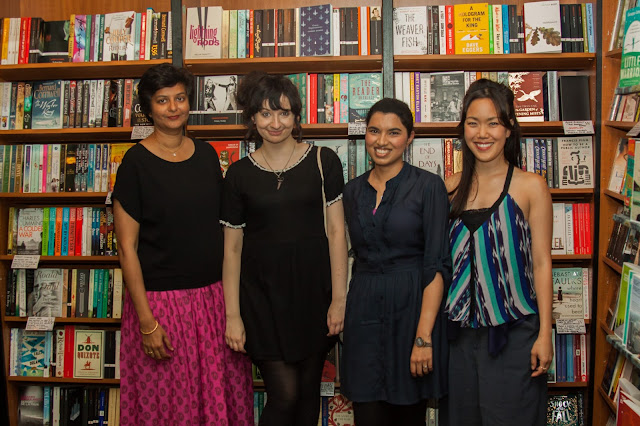 Perf humans from left to right: Susmita Bhattacharya, author of the Normal State of Mind all round literary genius, Zeba Talkhani, editor/writer/future fancy book prize winner, Vera Chok, actor, writer, superstar and me a confused and slightly bewildered creature who forgot to brush her fringe before this picture was taken. 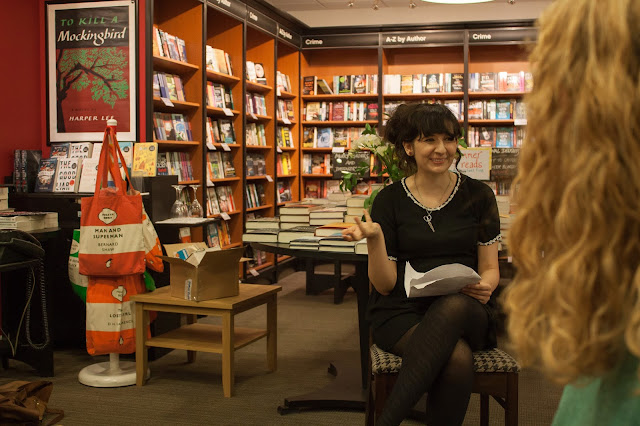 I was invited to give a talk and a writing workshop on my all time fave subject! Mental health narratives! And as you can see from the above photos I sat on a chair and made weird faces and stuff!

Here is the transcript of my talk as well as Zeba's unbelievably wonderful introduction of me which makes me want to cry forever to be honest:

Bethany Rose Lamont is my favourite person in the whole wide world – conversations with her always leave me feeling uplifted and an afternoon I spent with her last month is on my list of top 10 interactions I’ve ever had. The list includes Elif Shafak & Zadie Smith. In Beth’s own words, Doll Hospital was launched following her struggle with suicidal ideation during her final term at Oxford. Doll Hospital is neither a doctor’s pamphlet nor does it come with the false promise of a celebrity’s ‘it gets better’ YouTube video. It is quite simply a collection of art and writing created by people dealing with mental health struggles with a story to tell. For me personally, the magazines have a soothing effect and reading through the diverse voices captured in each issue is a reminder of how far we have yet to reach before we create a level field for a balanced mental health dialog in the mainstream media. There is an unmistakable lack of representation in contemporary mental health conversations and Doll Hospital aims to fill that ever-growing gap. Before I hand over to Beth for what promises to be a hands-on workshop on interacting with our mental health and communicating it to the world, I would like to inform you that Issue 2 of Doll Hospital is up for pre-ordering until 19th Aug. I must warn you, print copies of Doll Hospital sell out really quickly but digital copies of Issues 1, 2 and 3 are available on their web store. Please join me in welcoming Bethany!

We sit here in a bookshop surrounded by the voices deemed ‘good enough’, ‘smart enough’, ‘important enough’ to merit the time to be bound in a book and placed on display. But these are not the only stories out there and to support a structure that only allows the ‘well-connected’ and ‘well-read’ to express their suffering is a structure I’m not interested in buying into. It’s what I refer to as ‘the book deal model of mental health’ where an agent’s approval and a fancy book deal is needed in order for anyone to listen to your experiences.

But this is a lie, you don’t need to fulfill a highly Westernisned, Eurocentric model of capitalist faux-intellectualism to create and reap the joys and catharsis of your creation. We may not be Stephen Fry or Sylvia Plath, we may not have blue ticks on our twitter profiles, or letters at the end of our name, but our voices matter. Our stories matter, we matter. And to be totally honest I don’t want to hear from celebrities or long past historical icons of literature, I want to hear from my friends and family.

This uncertainty of authorship is extended through one’s intersecting experiences. It is no coincidence that the most famous, most well referenced novels in mental health literature are written in the English language. If mental health writing itself is an intimidating task consider the double bind of mental health and that abstract idea of whiteness for authors of colour, for authors for whom English is not their first language, or those who have struggled to learn English even as their first language due to cognitive or developmental disability, or who through the violence of the British class system regard literature as accessible only for the Etonians among us. The myth that mental suffering is a ‘privilege’ of the white, wealthy Western author, is certainly an outrageous claim when considering the trauma of racism and colonization, as well as the struggles of classism and ableism.

The power of libraries, of reading, of writing is not to be underestimated, but that does not mean it is without critique, its quiet magic has saved so many of us, but it has also alienated so many of us, and sometimes it has done both simultaneously. Archives are not exempt from the powers and influences of the ruling ideology, often they are manifestations of it and even the most beloved books of our youth have the capacity to harm as well as heal.

I think of the work of Sylvia Plath, how her classic novel ‘the Bell Jar’ can simultaneously be a masterpiece of mental health literature, seamlessly deconstructing misogyny, mental illness and institutional control, whilst simultaneously utilising violently racist imagery, an issue that sadly also extends into her journal writing. In alienating and affirming in equal measure we are reminded that we need storytelling beyond The Bell Jar, beyond the white Oxbridge graduate, beyond the comforts of Penguin classic books and London publishing houses. That we do not need to necessarily reject these texts that are so beloved to so many, that have saved so many, but rather we can use these books as building blocks to peek beyond these towering bookshelves and see a future where our voices can be heard.
I think of the work of David Foster Wallace, how grateful I was to find his writing when I was a teenager who was at high risk of suicide, the first writer I had found who possessed the alchemy to translate such individual isolation into a universal connection, and in writing about such an exit offered a way out beyond ending one’s life. But I also cringe at his oversimplified legacy, how the breadth and depth of his work has become an icon of intellectual alienation, an impossible reading task at the bottom of one’s to do list, rather than a dear friend or life line.

I think of David’s peer, Elizabeth Wurtzel, who supposedly served as the inspiration for his short story ‘The Depressed Person’. I think of how awesome it is that writing on mental health can top best sellers list, of how cool it is that she can weave her unapologetic experiences with the literature and pop culture of the past. But I also think how in the media, movie adaptations, and even in her publisher’s choice of book covers, her narrative and value has been intrinsically tied to her youth and beauty, creating an unrealistic expectations that even Wurtzel herself has admitted has affected her sense of worth as she has aged.

All these authors are fascinating forces but I think we can all agree that we can build on their legacies for the better. This is why I have selected three of their books for our writing workshop: Sylvia Plath’s ‘The Bell Jar’, David Foster Wallace’s ‘Infinite Jest’ and Elizabeth Wurtzel’s ‘Prozac Nation’.

Rip some pages out of these books and make something of your own. Have a conversation with these authors, talk back to these authors, doodle in the margins, create black out poetry out of Infinite Jest, smear glitter glue and rainbow gems over Infinite Jest! Because mental health doesn’t need to be serious and highbrow, it can be goofy and glittery and David Foster Wallace for all his love of deconstructing literature and embracing pop culture would probably be very pro novelty stickers. Make collages out of Prozac Nation, paper dolls out of the Bell Jar, whatever you wish! Let’s use their work to create something new, something playful, something just for you.

I can’t wait to see what you come up with!

Thanks so much for having me!