So y'kno how I was gonna go back to Oxford to talk for that conference?

Like I kept on joking to my friends about how ironic it was that the thing that made me 'qualified' to talk about mental health (i.e. being super duper mentally ill myself!) also made me a terrible public speaker (coz it means I'm an anxious mess)

Well it was absolutely amazing and life giving and wow?!

Because my time as a student at Oxford was incredibly difficult because of chronic mental health stuff.

(Also not gonna lie some people at Ox could be real entitled jerks generally, which isn't like a particularly great atmosphere for anyone....)

So it felt very symbolic and level up-ish that the last time I was at Ox, in September I was graduating, and then returning only two months later to be talking!?!! Tbh I think that's pretty rad and I'm proud of myself I think.

It also felt so, so, incredibly important to be surrounded by so many amazing women of colour doing such brilliant work to decolonize feminism when Oxford itself is such a deeply colonial institution, which continues to alienate and exclude people of colour, particularly black students.

(I mean Rev. Jesse Jackson has personally called Oxford out for their appalling admission rates for black students, like this is an issue people!!!)

Saying this, whilst I'm 200% a+ for creating spaces to discuss intersectionality, and the DH agenda --within-- academia, I definitely don't want to limit discussions within these institution's borders.

We need to look beyond academic institutions for sure.

And it was super cool to meet so many amazing people who were doing that (even if my first introduction to them was at a university!)

Shout out to Sanaa Hamid (who I'm a HUGE fangirl of anyway!), Indigo of I Shape Beauty (was so brilliant to meet her irl after working with her in the spring!), Hana Riaz, director of the Body Narratives i.e. my new favourite thing ever, Gladys Jusu-Sheriff, from WAND,the  Women's Association for African Networking and Development and Laura from WISH for all being rad and amazing. Expect dorky fanmail from me soon!

Oh, and the talk itself went suprisingly well? People laughed at my shitty jokes and the place was packed! I mean I was expecting like 10 people but it was a full house, people sat on the floor, people standing up! Wow! Everyone clapped and Dr Joan Rutherford said I should be the head of the NHS which was lol.

The panel discussion was super interesting and great too and I got to meet lots of lovely people afterwards so yay!

In general it really confirmed that what we’re doing with DH is necessary and to never compromise with stuff, no matter how many passive aggressive white feminists say DH is alienating to them. That we need to keep on challenging cis-centric, ableist bullshit. Because seeing these issues getting unintentionally forgotten, even by women I really admire (I mean both subjects weren’t really discussed at all?!) Well it just shows that we really need to centre these things to truly progress towards intersectionality, to truly decolonize these spaces.

Waiting for my second train there were fireworks on the platform, and when I got home my Grandma gave me a packet of oreos and my Mum gave me a mug that said 'I woke up like this'. The world can be scary, and I do struggle, but being alive can be pretty magical sometimes.

Oh and if you couldn't make it, here is the transcript of my talk! Enjoy! 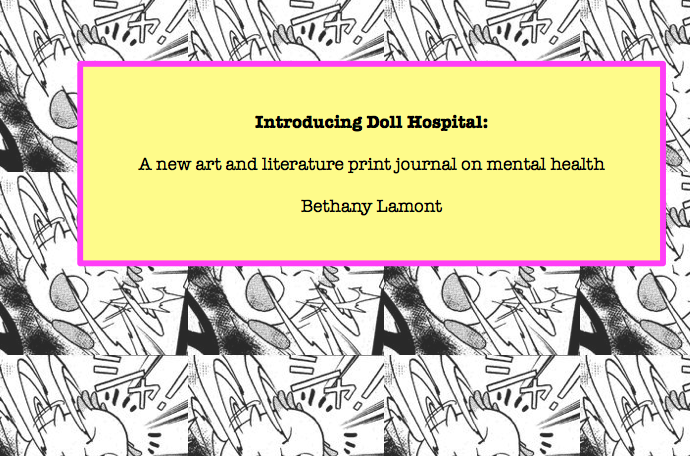 Hi! My name’s Bethany Lamont, I’m an artist and writer, and the editor in chief of the mental health journal Doll Hospital which I’m going to talk about today. 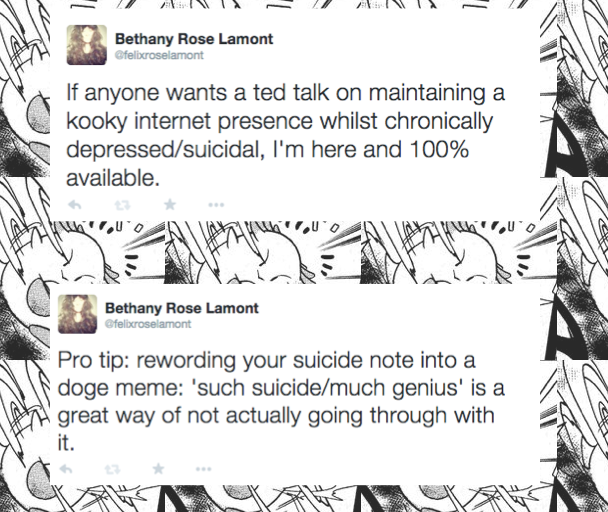 One of the first questions I get asked is if this project is coming from my own personal experience, and the answer is yes absolutely! I have struggled with mental health issues and suicidal ideation since childhood, complemented with my neurovariance, which when combined can make functioning a bit difficult sometimes.

This was particularly bad for me in May, which was my final term at Oxford, I was struggling with chronic depression, compulsive tendencies, anxiety and suicidal thoughts. Lacking the resources and language to deal with this stuff I ended up posting a lot of weird, and probably quite unsettling tweets. 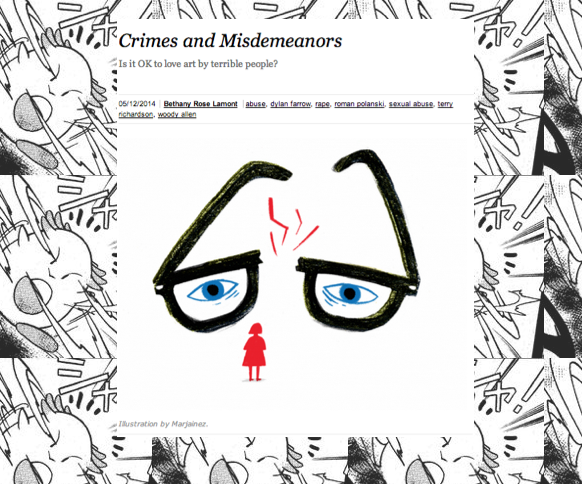 Around this same time an essay I wrote for Rookie Magazine, on my own personal trauma was published. It was really well received, but the constant flow of retweets, comments, and emails overwhelmed me, and combined with my rather dubious social media presence I began to question if the internet is always the best platform for survivors and mental health sufferers to share their stories. Don’t get me wrong the Internet is great, not just for cat videos, but for finding your community in a world that consistently, and violently, erases marginalized identities.

But online there is really no such thing as a safe space, and your small, safe tumblr circle can easily end up getting picked apart by online trolls.

Propelled by all these mixed up feelings I posted another tweet, not another weird self deprecating suicide note, but a call for submissions, to see if any of my followers would be maybe interested in contributing to a mental health zine, a vague sort of idea which I expanded on in a blog post, where I wrote:

“What if I could keep the rad ethos of community and creativity of zine culture but create something that can reach more people than a small circle of tumblr and twitter? People who might not necessarily know what a zine is but know what it's like to stop breathing on the way to class, to stop eating, to want it to end, but to want, to not want, to feel like this?”

Okay, so the response for this kind of blew up, I was getting submissions from all kinds of people, artists, writers, poets, real grown up people, which was awesome, but one thing I kept on getting told over and over again, was how ‘strong’ I was, which though well meaning made me cringe a bit. A combination of respectability politics and fixation with a feel good narrative, means there is a presumption that to discuss an issue, you must be over that issue, this is not only misleading, I mean I struggle with this stuff everyday, but extremely damaging.

In my desire to move beyond simplistic ‘it gets better’ strategies I wanted to assemble a team of editors and contributors who were also dealing and writing about this stuff too, people who were interested in going beyond exploitative tell all accounts of trauma and mental illness, and instead tell their stories on their own terms, and in their own time. And no, what we publish does not offer a ‘cure’, but instead offers an honesty that I believe is healing in and of itself.
When it comes to submissions our attitude is that we don’t care about your clips, your qualifications, your CV, if you want to create something about your experiences of mental health you’re in basically. With many of our writers this is their first time being published, however, we have also been lucky to receive contributions from more well known artists and writers in this area including Latoya Peterson, editor of Racialicious, Tavi Gevinson of Rookie Mag, mental health advocate and writer Esme Wang, Mey Rude, whose the editor of the trans section for Autostraddle and Kristina Wong, the performer perhaps best known for her one woman play, Wong Flew Over the Cuckoo's Nest.

One of the most important things for me in creating Doll Hospital was to ensure it explored mental health through an intersectional lens. Not to ensure it was on trend or anything like that, but out of the desperate necessity to tell my story, and those of my community honestly and accurately. In many ways I was feeling frustrated as a woman of colour, albeit one with light skin and white passing privilege, as someone from a working class background, as someone who is neurovariant, as someone who falls under the queer and gender variant umbrella, that mental health was presented as a weird sort of privilege for white middle class people with too much free time.

It’s something I reflected on in a piece I created for the coalition zine,a publication for and by women of colour, where I wrote:

“What does it mean for a young girl of colour, struggling with mental health and suicidal ideation, to read the Bell Jar and feel nothing? Is she (I) not truly depressed? Am I reading it backwards? Upside down? Is it wrong of me to appreciate the remarkable gifts of these (white) women, struggling with similar mental health troubles, take my notes, reference them in class, admire their craft, but not choose to turn to them in my own time of need?”

Well, Kristina Wong kind of my answers my question in her contribution to Doll Hospital, Mental Health and the Model Minority

“The truth is we’re not all the same. You can’t shy away from saying that certain ethnic groups or races or genders are considered to be more at risk for disease, or high-cholesterol – or in the case of Asian American women, and people of color – depression.”

And it is this necessity of difference that I hope Doll Hospital can work towards. Our first issue has just been put together, we explore all kinds of topics from the trauma of rape, to dealing with psychosis and being in a mental health ward, as well as more light hearted pieces on self care, and even an essay on Kanye West, complete with fan art. Our contributors are from all different experiences and backgrounds, because there is no one story on mental health and to suggest otherwise would be kind of ridiculous. 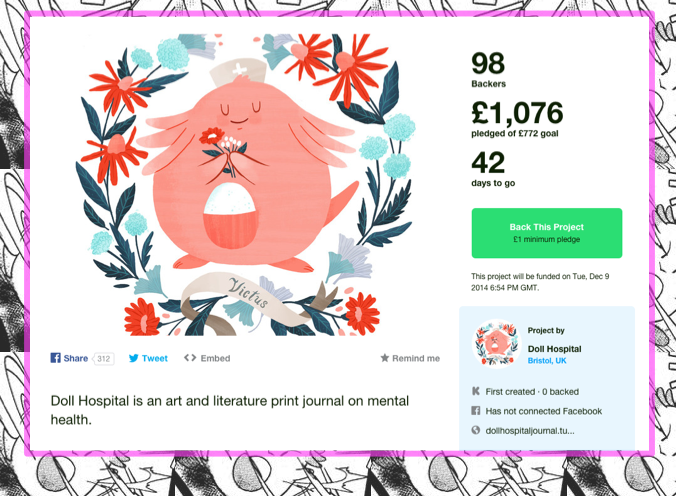 In terms of accessibility it was important to me that this journal was available to everyone, regardless of their financial situation, so the journal is pay as you wish, you can pay a little, you can pay nothing, I don’t mind as long as you get to read. This is obviously a bit tricky logistically as printing costs money, so a few weeks ago we launched our Kickstarter to cover the costs of 100 copies, this was covered in cool magazines like The Toast and we ended up reaching our goal in just a week, we’re over £1,000 now which can help us cover distribution so we can ship it all across the world. But I’m definitely keen to raise more so I can compensate all our amazing contributors for their hard work. So if you’re interested in donating, or would like to pre-order a copy, you can head over to our Kickstarter page, which also includes an excerpt of the journal itself. 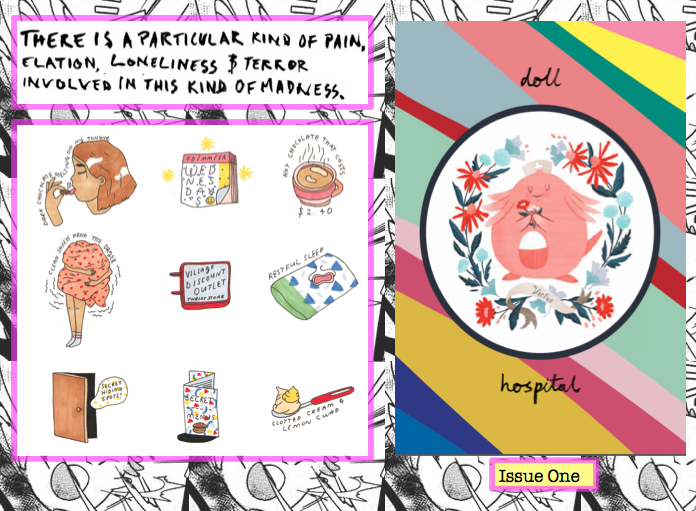 Because I guess what all this comes down to is that to speak of your struggles is not a privilege; it is a right. We need to challenge the idea that in order to speak authoritatively on ‘mental health’ you need to be university educated, middle class and white. In opening up the borders of who can speak, and in what way, I believe we can foster more inclusive, honest, conversations for women of colour, and, yes, white women too. Because we can’t go on like this. We need to do better.